Whither the Republican Party

It’s a bit jarring to encounter these two pieces within 10 minutes of each other.

From an opinion column in The New York Times by Gerald Alexander, a professor of political science at the University of Virginia:

In fact, liberals may be more effective at causing resentment than in getting people to come their way. . . .

Consider some ways liberals have used their cultural prominence in recent years. They have rightly become more sensitive to racism and sexism in American society. News reports, academic commentary and movies now regularly relate accounts of racism in American history and condemn racial bigotry. These exercises in consciousness-raising and criticism have surely nudged some Americans to rethink their views, and to reflect more deeply on the status and experience of women and members of minority groups in this country.

But accusers can paint with very wide brushes. Racist is pretty much the most damning label that can be slapped on anyone in America today, which means it should be applied firmly and carefully. Yet some people have cavalierly leveled the charge against huge numbers of Americans — specifically, the more than 60 million people who voted for Mr. Trump.

And then this account of a conversation between Robert Reich and a friend of his who is a former Republican member of the House of Representatives:

Me (Robert Reich): Trump won’t make it to 2020. If Mueller doesn’t skewer him, the Stormy Daniels stuff will.

Me: Whatever happened to your prediction that the GOP would dessert him once they got their tax bill enacted?

He: I wasn’t paying attention to the Trump coalition.

He: Trump has pulled together the white working class and the moneyed interests of America. No one thought it possible. It’s the new Republican Party. Racist, anti-foreigner, deregulation, tax cuts. Reagan on steroids. Unbeatable. If he wants a second term, he gets it.

By John, 3 years3 years ago

Michael Haneke on Ideologies and Political Content in Film

From The Paris Review:

I despise films that have a political agenda. Their intent is always to manipulate, to convince the viewer of their respective ideologies. Ideologies, however, are artistically uninteresting. I always say that if something can be reduced to one clear concept, it is artistically dead. If a single concept captures something, then everything has already been resolved—or so it ­appears, at least. Maybe that’s why I find it so hard to write synopses. I just cannot do it. If I were able to summarize a film in three sentences, I wouldn’t need to make it. Then I’d be a journalist, I’d get to the heart of the matter in those three sentences, and my readers would know what it’s all about, and that would be that. But that is not what I find interesting.

Look, life itself is the object of art. You aim to construct a parallel world in your novel or your play. The truly captivating thing is the story that ­unfolds between your protagonists. Of course, for somebody with political convictions—and we all have those—there is no way they aren’t going to seep into your artwork. Céline, for example, was a right-wing extremist. And that was visible in his work, but he still wasn’t completely inept as a writer. There are thousands of examples, from both the left and the right. At the academy, I always lecture on propagandistic films of various origins so as to sensitize my students to their particular way of functioning. In my films, however, politics happen only subcutaneously, and it is never my ­intention to say, Look, this is what I’m trying to tell you, now swallow it. My ­objective is a humanistic one—to enter into a dialogue with my viewers and to make them think. There isn’t much more you will be able to achieve in the dramatic arts. And frankly, I don’t know what else you should be able to achieve.

By John, 5 years ago

Ross Douthat, Gay Marriage, and the Folly of Chalkboarding Happiness with Weak Data

As New York Times op-ed writer Ross Douthat sees it, the Supreme Court’s Obergefell decision recognizing the rights of gays to marry is a kind of fool’s gold. Marriage, you see, has become à rebours. While gays have been fighting for the freedom to marry, straights have been busy seeking a different freedom—namely, freedom from marriage. And the brave new world wrought by this freedom, along with no-fault divorce and other social dispensations, is a less happy place, in Douthat’s reckoning, that the patriarchal, gay-intolerant world we have left behind.

Unfortunately I see little evidence that people are actually happier in the emerging dispensation, or that their children are better off, or that the cause of social justice is well-served, or that declining marriage rates and thinning family trees (plus legal pressure on religious communities that are exceptions to this rule) promise anything save greater loneliness for the majority, and stagnation overall.

Now this is a weird argument, because thinning family trees and declining marriage rates are a lot of social ills to lay on doorsteps that portion of the roughly less than 2.5% of America who are gay and who want to make a formal, life-long commitment to the people whom they love most in the world. After all, we’re talking about people who want to get married, who are trying to escape loneliness and build stable families, and who have suffered all kinds of discrimination, including job loss and harassment and even on occasion violence, to pursue that dream of commitment and stability.

(And it’s particularly weird of Douthat, in the middle of his lamentations, to link to a study about kids suffering when raised by single mothers, when the topic at hand is gay marriage. Gay marriage, like any kind of marriage, does not contribute to a rise in single mothers; on the contrary. And single-parent households have been rising in communities, such as many black communities, which has historically been opposed to gay marriage. If the country wants to lower the rate of single-parent families, perhaps we should probably be talking about lowering the incarceration of rate of young black men or providing better wages and more health benefits to low-income parents; but no, to Douthat, gay people getting married is in some mysterious way, clearly not involving empirical causality, a contributor to single-parent families. Go figure. Let’s blame gays for the Red Sox abysmal showing this year, while we’re at it.)

Speaking of happiness: Do you know who’s happy now? The gay couples I know who have finally be allowed to get married. Their happiness should count as much as anyone else’s. To Douthat, though, their happiness is negotiable—or perhaps negligible—as long as other social ills exist.

Douthat’s focus on happiness seems to be a red herring, anyway; that is, if we’re really considering happiness for everyone, not just for straight conservatives, because the pre-Obergefell status quo was hardly a universally happy society, and much of the unhappiness gays have felt derives from their treatment from the establishment now muttering about dispensations. Religious conservatives, including Catholics, have been hostile to gays for centuries and with no small amount of animus. And that animus remains ardent. Don’t just take my word for it. After the Supreme Court’s decision, Catholic author Father James Martin, SJ noted:

No issue brings out so much hatred from so many Catholics as homosexuality. Even after over 25 years as a Jesuit, the level of hatred around homosexuality is nearly unbelievable to me, especially when I think of all of the wonderful LGBT friends I have.

Douthat’s message to gays seems to be: “Sure, you want to forge a solemn, life-long commitment with the love of your life, but you shouldn’t do that, because in some mysterious way your making this commitment weakens social commitments overall and leads to more loneliness. Take it from us, the conservatives, the people who have been treating you like criminals and child-molesters for decades.”

(As with many Douthat columns, I get the feeling the problem he’s trying to solve is not who gets to be happy, but rather who gets to decide who gets to be happy, and for Douthat the answer is always patriarchal Christians in positions of authority, not anyone else, regardless of the systematic injustices that prevailed under that earlier, largely white, Christian, male leadership.)

Here’s a different approach: If you want to strengthen social bonds and decrease loneliness, let people who love each get married, and while you’re at it, treat them like full human beings who have the maturity and wisdom to choose their life partners.

And if you want to understand why church attendance in declining, contributing in an empirical way to loss of community in America, take a closer look at the intolerance Father Martin was referring to. Because to Millenials and older Americans who are tired of this relentless demonizing, the Christian Right’s fulminating righteousness, however thrilling to the expounder, is just fool’s gold.

By John, 6 years6 years ago

Clementa Pickney and the Way to Live

“The most irritating thing about Senator Pinckney,” said State Representative William K. Bowers, a Democrat from his district, “is that when you had a debate he would just come over and pat you on the back and say, ‘Maybe tomorrow you’ll be thinking right.’ He was full of love and full of respect.” 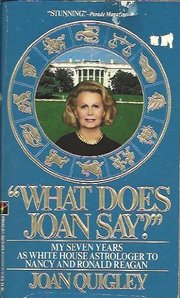 Tired of hearing about Obamacare, immigration, taxes, and Ebola? Dreading hearing about these things endlessly in the 2016 presidential debates? Don’t you wish we had something new to discuss with the candidates?

Well, jump for joy, because we do—thanks to a recent New York Times obituary reminds us that Ronald Reagan, the man revered by today’s GOP as the exemplar of American presidents, consulted an astrologer on matters ranging from Air Force One’s flight plans to the timing of international summits. Joan Quigley was the administration’s “most closely guarded secret,” according to former Treasury secretary Donald Regan. Nancy consulted the San Francisco-based astrologer three times a day and paid Quigley a handsome $3,000 monthly retainer for most of the Ronnie’s two terms.

Here’s the colorful American history we’ve been looking for to enliven what might otherwise might just be another tiresome political campaign. Gwen Ifill and Bob Schieffer are probably busy, so I’ve gone ahead and drafted some initial debate questions. Let’s ask the candidates . . .

2. Nancy selected the astrologer for the Reagan White House. Do you believe that the duties of selecting the White House astrologer should be left to the First Lady? What role should the President play? Should this position require a Senate confirmation hearing?

4. Throughout your campaign, you have been a strident supporter of calls to return this nation to its Judeo-Christian heritage. How much of your fervor about this issue derives from sincere religious conviction and how much from your just being a Taurus?

5. Would your White House complement astrology with any other forms of divination, such as casting lots or reading sheep and poultry entrails?

6. Will you be paying for your astrologer out of your own funds, or will his or her expenses be covered by taxpayers?

8. Every administration makes it mark on life in the capital through its own strict or lenient interpretation of protocol. At State Dinners and on other official White House occasions, would the American public have the opportunity to see your administration’s astrologer dressed in flowing velvet robes and a pointy hat?

By John, 7 years7 years ago