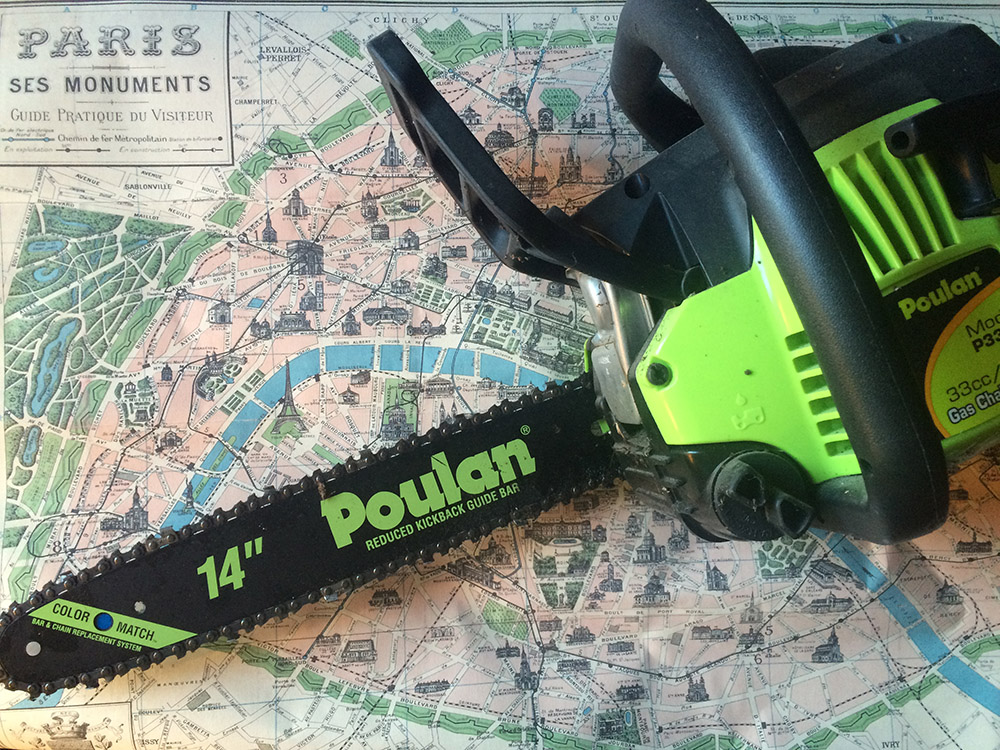 This was a quick improvisation that I wrote in a Facebook post. A friend of mine asked people to name that last book they read, appending “with a Chainsaw” to the title. This led to some amusing combinations: “History: A Very Short Introduction with a Chainsaw,” “The Life-Changing Magic of Tidying Up: The Japanese Art of Decluttering and Organizing With a Chainsaw,” and “It Can’t Happen Here with a Chainsaw.” I posted “The Guermantes Way with a Chainsaw,” and no sooner had I imagined Proust’s Duchess de Guermantes have a way with a chainsaw than the following scene occurred to me, transposing the social drama of a Parisian salon to a lumber camp in rural Maine.

In a dim corner of the camp’s dining hall, Mme de Villeparisis was seated at a low table, her hair tied back in a rustic bandana and a pair of silver-rimmed spectacles resting low on her sunburnt nose. Her neat gingham dressed was nearly entirely obscured by a small leather smock, now pale from a gentle snowfall of sawdust, and she “daubing away,” as she expressed it, with considerable skill as with a single, modestly bejeweled hand she wielded a 14″ Poulan chainsaw to carve in neat slices and angular cuts a block of burlwood, revealing through her industry a seagull, wing spread, flying low over a curled breaking wave.

The door by the stuffed bear creaked opened and a figure began creeping through the room, shuffling in the direction of our little group. It was Legrandin. He was wearing a pair of pressed Carhartt trousers and a Black Watch plaid shirt which revealed itself in the firelit gloom of the hall to be made not of traditional flannel but rather crushed velvet. I had heard from Swann that he still retained some mannerisms he had acquired working the high Sierras the previous summer, so it that it was not uncommon of him to quote John Muir and other ecstatic writers of that region, and to wear a forked beard and to extemporize at length of the marvelous yield potential of redwoods and black oak, which he compared favorably to our “paltry” and “womanish” white pine.

He scurried now to a position as close as possible to Mme de Villeparisis without placing himself within the arc of her dancing saw. He pulled off his knit cap and clutched it with both hands. “Yoiks, ma’am, I came scurrying once I smelled the flapjacks from across the valley.”

Mme de Villeparisis made no sign of acknowledging this remark. She merely frowned and glanced about her work table for her canister of bar and chain oil.

“Oh, are we in a valley?” said Bloch, loudly, waving his tin coffee cup as he spoke. “I had not interpreted that slight declension in the land to be a true valley.”

Across the room, M de Norpois’ brow furrowed and emitting the faintest sigh at what he took to be Bloch’s inanities, the type of speech one comes to expect of a city-dweller who spends six hours riding railway cars and perhaps a mule train and upon setting his shiny, uncreased, and unscuffed leather boots on pine-needle-laden floor of a gully declares himself a man of the country. And in order to draw attention away from Bloch’s uncouth, city-slicker ways, and with the gravity of a land manager who has negotiated with all manner of landholders and roughs over many decades working the forests from Rochester up to Calais, the elderly lumberman lifted a large, impeccable bowie knife close to his beard and set about picking his teeth.

By John, 4 years4 years ago

In Proust’s Within a Budding Grove, the painter Elstir tells Marcel:

“There is no man . . . however wise, who has not at some period of his youth said things, or lived a life, the memory of which is so unpleasant to him that he would gladly expunge it. And yet he ought not entirely to regret it, because he cannot be certain that he has indeed become a wise man—so far as it is possible for any of us to be wise—unless he has passed through all the fatuous and unwholesome incarnations by which the ultimate stage must be preceded. We do not receive wisdom, we must discover it for ourselves, after a journey through the wilderness which no one else can make for us, which no one can spare us, for our wisdom is the point of view from which we come at last to regard the world.” (pp. 605-606)

By John, 5 years5 years ago