From the liner notes to Harnoncourt’s final recording:

In most settings of the Mass, the “Dona nobis pacem” is interpreted in such as a way as to suggest that peace already exists. And yet the words mean that is not peace that reigns but catastrophe. Beethoven does not say “Thank you!” but “Give!” This is particularly thrilling in the Missa solemnis. For me, this begs the question as to whether peace can exist at all. I see this psychologically. Of course, memories of the Napoleonic Wars were still fresh in people’s minds at this time, and you may be even be able to see a burning city in the music. But the battle painting tends, rather, to depict the conflict that goes on inside us. It is a plea—as Beethoven himself said—for “inner and outer peace.” And it strikes me as far more plausible that it is the inner conflict that constitutes the actual drama. The inner aspect is more important than the outer one. But this is true of each and every one of us.

Harnoncourt conducted Missa solemnis with the Concentus Musicus Wien and the Arnold Schoenberg Chor in early July 2015 in Graz, Austria. These were marvelous performances—the last of Harnoncourt’s long and distinguished career. This CD is highly recommended. 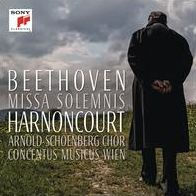