Some Deft Storytelling by Jason Isbell

I hadn’t heard of country singer-songwriter Jason Isbell until I read Dwight Garner’s story about him in the New York Times. Now I’m a fan. His albums Here We Rest and Southeastern are getting a lot of play in my office. I’m also enjoying Catching Lightning, a CD by Jason’s wife, Amanda Shires. She’s a wonderful singer, songwriter, and fiddle-player.

One of the things I like best about Jason’s songs is their colorful but concise story-telling. I’m particularly impressed by the how much ground he covers in just a few lines in his song, “The Songs She Sang in the Shower.”

There are countless country songs in which a singer pines for a former lover. This song belongs to that tradition, but it’s stranger and deeper than any conventional twangy lament. Isbell could begin on a note of rue or yearning. Instead, he begins with some cheap bravado, and in about eight lines tells us more about two people and why they broke up than most song writers could describe in eight or ten verses.

The song begins cryptically; we don’t know what’s going on or who’s speaking to whom. In the first and third lines, the singer pauses between the first three words and the second three words. I’m going to break those lyrics in two here to help convey the effect of the phrasing:

So far, we’re not in a break-up song at all. One guy is insulting another guy is a rather pedantic way.

The pause lets us linger on this. The quip didn’t go well, and the recipient is responding with a punch.

Not cut the “air,” but the “smoke,” which tells us where we are: a crowded smokey bar, where one guy is picking a fight with another. (“Smoke” also sets up a rhyme in the next line, but it’s perfect on its own.)

The singer is so proud of his cleverness, that even as he’s about to be punched, he’s wondering if his jibe has been appreciated.

This is a great cinematic cut. He’s doesn’t linger on the bar fight. He doesn’t make some wry, wistful remark about how he got decked. He jumps to the painful, quiet ride home, in which his girlfriend, who we know now has seen too many of these fights, informs him she’s had enough.

With a steak
held to my eye
I had to summon the confidence needed to hear her goodbye,
And another brief chapter without any answers blew by

And there it is. He’s been punched in the eye and dumped in the same evening. He’s still acting: summoning confidence now, instead of turning out clever insults. He listens—and she’s gone.

He’s mystified. Things are not going well. He makes a joke, and he gets punched. He girlfriend dumps him, and he’s looking for answers. All he can do now is rue, reminisce, and wonder. (There’s a certain passivity to his character: he acts out and then watches the results, however painful they might be.)

In just eight lines, we’ve been given a rich and jarring portrait of two people. He’s clever but swaggering and reckless. Eventually she’s had enough of the trouble that swagger and recklessness stirs up. (How many other times has she had to pull him away from a fight? we wonder.) We get a sense of her patience and tact. She doesn’t storm out of the nightclub. She waits until they’re in the car to talk to him.

The rest of song is devoted to the singer’s longing and remorse. He’s alone now, appraising his lonely life and praying for something better. I particularly admire the couplet:

You can listen to the whole song here:

By John, 7 years2 years ago 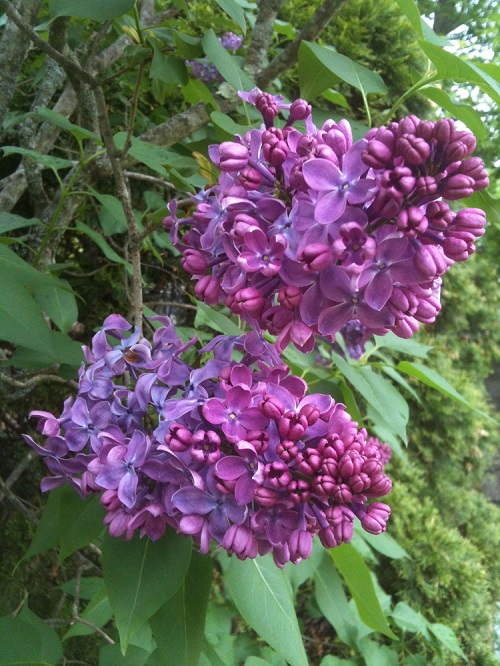 Especially in the evening, just as our vision becomes useless, the scent of lilacs seems to run riot in the air, saturating the empty night with sweetness.

By John, 7 years7 years ago