In a culture dedicated to pleasure, power, and stratagems, truth becomes simply another card in the deck.

No one speaks the truth here, in these circles that set the tone for society at large. —Perhaps a word of truth is out of the question, if only because people here are too clever and are acquainted with thousands of truths and untruths. The knowledge of human nature is too rich, the treasury of experiences in fact already too replete. In a sense, speaking the truth presupposes a certain narrow-mindedness.

So comments Robert Walser in “Frau Bähni,” a short recollection written in 1916 that appears in Berlin Stories (NYRB).

This little book presents Walser’s impressions—sometimes comic, sometimes somber—of Berlin in the first decades of the 20th century. The quality of the pieces is uneven, but the best pieces are superb, and I recommend the collection overall.

Of course, there are other cultures where a preference for truth seems almost quaint. . . . 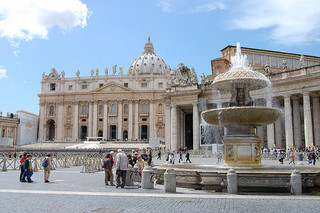 When the Vatican announced that contrite Catholics could earn indulgences and shorten their time in purgatory by following the Pope on Twitter, I thought, “Indulgences? Now there’s one Twitter stat you can’t track in Hootsuite.”

Then I realized that, Silicon Valley being Silicon Valley, it wouldn’t take long for new start-ups to appear, seizing the opportunity created by this latest social media currency, the papal indulgence.

I made a few phone calls to my VC friends and compiled this list of start-ups jumping into the tweet-for-indulgence market before the incense has drifted away.

Founded by a couple of Stanford grads, this start-up is addressing an obvious problem with indulgences: metrics.

“We want to be your mobile dashboard for measuring indulgences,” says Rafe Lucatelli, founder and CEO. “People are following the Pope, but they’re always on the go. They’ve got their smartphones with them, so a mobile solution makes sense.”

Version 1.0, now in Beta, tracks indulgences and lets you post your purgatory status to Twitter, Facebook, and LinkedIn. “In line at Starbucks, followed 3 tweets and got 3 months closer to heaven! #Indulgences FTW!”

Version 2, scheduled for later this year, will measure sentiment in your social media feeds and estimate how many years you’re adding to purgatory through hateful, lustful, or slothful behavior.

“Let’s face it, you’re not just always drawing the balance of time in purgatory down,” says Lucatelli. “You’re also adding to it every day. We’re working with people who really understand sin—we’ve got an advisory board of local theologians along with a team of former Oracle engineers—to build a sin assessment engine that will give you a sense of just how long your wait in purgatory will be. My guess is, when you see the total, you’ll keep following the Pope’s tweets.”

“Sin is the ultimate Big Data problem,” says Brent Hammacher, CEO of Sin Qua Non. “You’ve got billions of lives, a whole hierarchy of offenses—mortal sins, venial sins, white lies, press releases. There’s no way you’re going to track all that in a traditional SQL database. It makes what the NSA is trying to do look small. Which isn’t to say,” he adds, “that our friends in Virginia aren’t very interested in seeing what we’ve come up with.”

While start-ups like Indulgio focus on the individual consumer’s standing in the afterlife, Hammacher and his team are interested in moral corruption and redemption in aggregate. “Can you correlate expected time in purgatory with demographic data like zip codes and professions? We think you can,” says Hammacher. “There are some obvious spikes with cohorts like BMW drivers and members of Congress, but some of our other early projections have surprised us.”

An Indulgence Transformation algorithm might be able to wipe a lot of these slates clean. Again, Big Data and virtualization turn out to be key.

“If one user following one tweet on one device earns one indulgence, what could an entire server farm of virtual Twitter instances associated with a single Twitter account do for a sinful but proactive person in the twilight years of his life? Would certain high-net-worth individuals be interested in paying for this type of premier service? We know they would.”

Details on this start-up are murky. Funding has come from some of the marquee names in the Valley, and development is taking place off shore.

One unnamed investor told me this: “Look, what the Pope has done here is push the reset button on the Reformation. It’s 1300 again, but now we’ve got Facebook. How might things go differently this time?”

“3D printing. In the Middle Ages, people collected relics, but there could only be one femur of John the Baptist. With 3D printing, there’s no limit to how many penitents can have the same femur. It’s like the multiplication of loaves but with much, much bigger upside. If Leo X were still around, I’d hire him as my VP of Sales.”

Not everyone in the Valley is thrilled by the Vatican’s new foray into social media. Hunkered down in a little apartment in Milpitas, a former Breitbart intern and blogger who goes only by MLuther has been posting pointed diatribes against the Tweet offer and other Vatican practices in a Tumblr he calls “95 Problems and a Tweet Ain’t One.” On bulletin boards, he’s been flamed.

“We should have this wrapped up in thirty years,” he says.

It’s rained almost every day for a week, and we haven’t mowed, so the grass stands five inches or taller in the fields, and that’s not counting the long gauzy stretches we’ve let go wild to offer the bees their due of clover and dianthus.

Walking the dog the other day—in silence, since we both know the route—I noticed a shimmering movement in the grass before me: a little thin milk snake, a pale stripe on its dark back, slithered away in the grass, inches before my boots. I haven’t seen a snake on our land in over a year, and I was pleased for this sighting, however brief, which reminded me, among other things, that we are surrounded by much that we can’t see or that we simply overlook.

This is a loud time in New Hampshire. On weekends and sunny evenings, motorcycles roar past with radios blaring loud enough to be heard a couple of blocks away. Two nearby race tracks offer their own distinct varieties of noise: the dragway emits repeated throaty crescendos while the NASCAR track serves up a persistent up-shifting and down-shifting hum. And in the land of Live Free or Die, citizens set off their own fireworks for weeks on either side of Independence Day. Usually they’ll wait until dark, but occasionally a mild afternoon will be punctuated with an percussive boom that echoes off the tree line.

I enjoy a good fireworks show, and I don’t begrudge anyone their enjoyment of racing, but I am thankful for these these moments when walking (not driving) through a meadow (not a track or roadway) I discover nature in miniature showing itself, and I am attentive enough to notice.

There’s a lurking, slithering, whispering world out there, and too often we miss it.